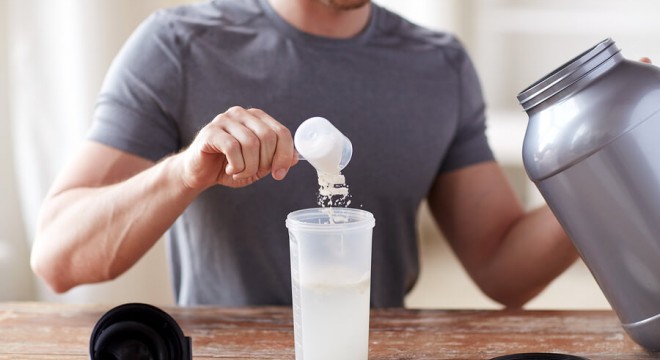 Previously, we looked at two studies which sought to better understand how amino acids influence protein synthesis in exercisers.

A study led by Stuart Phillips of McMaster University looked at whether a large single dose of whey protein (25g) had a different effect on post-exercise muscle protein synthesis than 10 smaller shots of 2.5g over a longer time period (a process designed to emulate the way in which another milk protein called casein is digested). A group of eight young male study subjects followed both dietary prescriptions after working out on the leg-extension machine.

The second study, led by Stefan Pasiakos of the US Army Research Institute of Environmental Medicine, also studied eight military personnel (seven men and one woman) who ingested a high-protein beverage (10g as essential amino acids) which contained either 1.87 or 3.5g leucine while working out on an indoor cycle.

In the first study, the single large dose of protein was found to increase muscle protein synthesis more than the series of smaller doses, and in the second study the synthesis was 33% greater among study participants who consumed the higher-leucine drink.

American Society for Nutrition spokesperson Shelley McGuire, PhD, said these studies, and others like them, help us understand and apply something we all inherently know: that the human body works in a complex, yet completely logical way. It makes good sense that consuming a food containing high-quality protein (like milk) during and/or immediately following exercise would help muscles get stronger. Muscle strength doesn’t just happen on its own, our muscles need to be both encouraged (as happens via exercise) and nourished (as happens when we eat well). Now we have even more scientific proof for this common-sense concept.

How Much Protein Do I Need?

For many people, their daily diet is enough to provide the amount of protein the body requires. For the average man the body needs .84 grams of protein per kilogram of body weight, while for the average female the body requires .75 grams per kilogram. However, if you exercise frequently, your body will most likely require more protein. Those with a high percentage of muscle mass will also require more protein, and a protein powder or supplement can be a simple way to achieve this.

Whey protein is produced from dairy, has an optimal amino acid profile and is quickly absorbed, making it a solid post-workout choice.

Casein protein also come from dairy but digests over a longer period of time, making it less appropriate as a post-workout supplement, but a better option for before bed (for those with high protein needs).

The Digestible Indispensable Amino Acid Score is an index used to reflect the essential amino acid and digestive properties of an amino acid source.

In an article from the University of Stirling, it is recommended that adequate levels of carbohydrate be consumed at the same time as protein post-workout to encourage muscle protein synthesis. The same article suggests that there is no difference in muscle protein synthesis between protein ingested up to two hours before a workout and immediately post workout. The article also suggests that muscle protein synthesis can be stimulated overnight by ingesting a slow release amino acid source. This is a time that is generally considered to have negative net muscle protein balance. It is considered more beneficial to have a balanced daily intake of protein, as opposed to an unbalanced intake, which commonly occurs in individuals who consume most of their daily protein in one meal, usually the evening meal. It is also noted that protein recommendations should be tailored according to the age of the individual.

We are still learning

Find out about fitness courses  at the Australian Institute of Fitness.